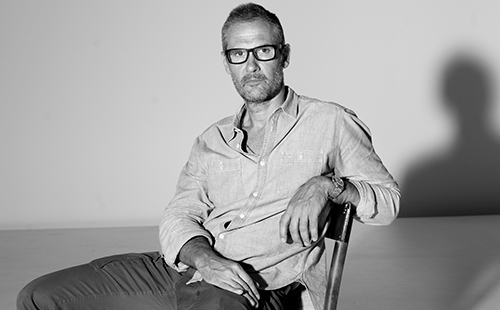 “My work develops through the reading of symbols and symbolism, sometimes taken from our everyday life and sometimes sought in precise historical periods and geographical settings and then translated into a contemporary and personal language.

My research changes, continuously transforming and maturing. It alternates between induction and deduction. It belongs to today and it adapts to the everyday life which surrounds me and it is constantly updating. And for me is very important to note that the everyday life brings continuous interconnections between societies and the places where they live in”.

Mauro Mori (Cremona 1965) has traveled widely ever since his youth and expresses his perceptions of his trips through his innate manual creativity. His opportunity to meet people and cultures, different languages and unusual places supply the ideas on which his research is based and they are expressed in his functional and figurative personalized forms.
The shapes are simple as the hand’s mould that create them. The materials with witch Mauro Mori creates his unique works became from our Natural heritage, exalting what the Nature has created. His works are directly molded by hands and not by machines so they brings emotional and affective values.

Solid blocks of natural material, often worked in their places of origin, like the Albizia Rosa of Seychelles or the marble, hand-picked and worked directly at Carrara, are the origins of the unique hand-made shapes. The plasticity of the materials, the relief work on them and the intended and evident craftsmanship constitute the common thread running through all his work and reveals the desired form through a process of subtraction.
His constant research and development is also shown by the work on the metals, which are tooled in plate form and finished with oxidations and patinas.

In 1994 he started his own business and in the 1998 he inaugurated his own atelier, Mauro Mori Studio.
In January 2014 has founded Hand©, a no-profit association that helps people, artists and craftsmen, in a physical, economic or other discomfort stresses.

Mauro Mori’s art furniture and sculptures are divided by theme:
Limited Edition, exclusive works in precious materials created in numbered limited editions with certificates of authenticity.
One off, gallery of unique art works.
Unlimited, collects works reproducible and developed even on special scales.
Sculptures, selection of some big scale works: three dimensional forms that stand autonomous in the space. And a precious small dimension sculptures collection in limited edition.
Wall sculptures, high and low reliefs in various materials. Three dimensional works obtained by mixed media on metal or on wood. The color normally used when painting is replaced by acids to oxidize, to change the tone and the colors of materials. Even in this case is used a process of subtraction to obtain marked signs that permit to be crossed over by the eyes of the observer.
Project, exactly customized to fit the landscape, by cutting and composing wooden or metallic elements, that the natural and cultural suggestions of the context transform in an inevitable source of inspiration.

2019
Les Ateliers Courbet – Les Ateliers Coubet presents the May 22nd unveiling of Les Editions Courbet collection by Mauro Mori with an exclusive edition of sculptural furniture and objets handcrafted by the artist
Fuori salone – Fuori Salone 2019 from 9th to 13th April – Studio visit – Via G. Meda 37, Milano
Gabriel & Guillame – OF CURVES & CONCEPTS, an exhibition of collectible design – Thursday March 28, 2019
Small Home Great Projects – 2019 March 19th – A collective exhibition at Triennale Milano, that investigates the meaning of the house in the context of family evolution and the transformation of contemporary way of living.

2018
DesignMiami/ Les Ateliers Courbet presents The Masters Editions by Giancarlo Valle and Mauro Mori.
HOMO FABER, Crafting a more human future. The Michelangelo Foundation for Creativity and Craftsmanship based in Geneva, Switzerland, created by Johann Rupert and Franco Cologni, presents an inspiring showcase of the finest European craftsmanship. Venice, Fondazione Giorgio Cini, San Giorgio Maggiore island.
Memory of Matter, Design to touch.Fuorisalone 2018, Milan. Mauro Mori participates in Design + Sensibile, initiative by Massimo Caiazzo, which sees the integration of Zona 5, a district of Milan, in the official Fuorisalone circuit. Here are presented unique works and design objects that the public is invited to look and to touch through to perceive their feelings to the different materials used.

2008
Fondente, selection of contemporary signs and fragments of the past linked by tones of colors and “fondente” patinas, Mauro Mori Studio, Salone del Mobile, Milan.

2002
Unexpected Too, Sotheby’s, New York.
Moving On, some works about the concept of physical and metaphysical movement, Space Scapa of Scotland, Salone del Mobile, Milan.
Pubblicazione di Works, catalog of the most representative works from 1994 to 2002.

Mauro Mori has been published by the most famous fashion and design magazines and in the following books:

You have Successfully Subscribed!